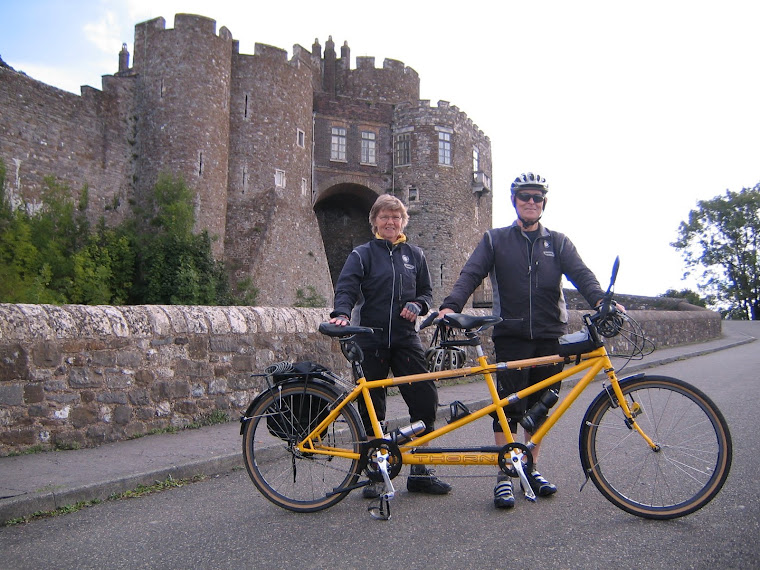 The book 'IN A ROUNDABOUT WAY...'  has now been sold out.    However, there are still a few books for sale in the fietsvakantiewinkel in the Netherlands.
The book contains 103 pages with our daily distances. It includes 90 coloured photographs and also 8 detailed cartographical maps. There is also a list of our itinery.
Proceeds from the book have been used to purchase cycle parking in our village on the riverside. We live in a tourist village and bike-parking is very much needed and is now in place.

For any other enquiries please email  mblanchereedham@btinternet.com

The book is an account of our experience cycling the NSCR back in 2004 and 2009. Although it has detailed maps of each country where we have been cycling, it is not about maps as such. You need the proper guides for that. Anyone wishing to embark on such a journey will find the book very useful. It tells you about the wonderful sights, the people you meet while travelling, the different cultures, the splendid architecture, the colourful houses, but most of all the unspoiled countryside with the sound of the birds and the scents of the forest, where you can be totally alone for hours on end and that is magic.
Posted by Lionel and Mary Blanche at 10:05 PM 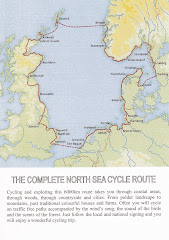 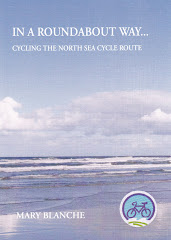 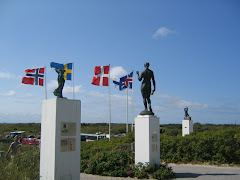 Thursday, 15th July 2004
Skiveren-Skagen, Skagen-Frederikshavn 54miles/86km. (1 slow puncture)
We left a very welcoming and hospitable place for our B&B. They were such a lovely Danish family. So we left for Skagen. Wind behind us, sun shining, but still cold. We went through forest plantation, sand dunes and were very much impressed when we arrived at the most northerly point of Denmark. We set on the beach and had our lunch. There were many people here, on bikes, cars, motorhomes, coaches etc. all arriving to come and see this famous spot...... Evanton-Lairg 50m
We have been looking forward to this ride as back in 2004 we were told by fellow NSCR cyclists we met in the Shetlands how beautiful this area is. Well, today has been the best day of all cycling days.
We soon picked up the route along the waters of Loch Shin. There were no hills, just slightly sloping minor roads all the way down with a slight wind in the back to Invershin. As we were hoping to find a place for a coffee we came across this visitor’s centre at Shin Falls. It is owned by Mohammed Al Fayed and no expense has been spared to make this a top visitor’s centre. We arrived half an hour before opening but they opened up for us and made us coffee. Wasn’t that nice! As we continued from Invershin we cycled along Dornoch Firth, again slightly sloping terrain......

Cycling along the Canal du Midi 2010 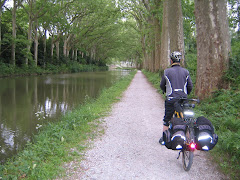 In May 2010 we took ourselves off to France. Always wanted to cycle the Canal du Midi. It is about 170 miles from Toulouse to Sete on the Mediteranean Coast. The main villages we passed through were Castelnaudary, which was such a lovely place. On to Carcassonne and of course we visited La Cite. Without doubt Carcassonne was the most beautiful part of the whole route. Not just the landscape but also from its cultural and historic point of view. On to Beziers and finishing in Sete, cycling along the med. It was a short but quite an interesting route. However the cycle paths in many places weren't that comfortable in the saddle region. The trees along the canal often had their roots showing above the surface of the path and it would have been better to have used single mountain bikes rather than a tandem. But in all we had a good time and of course the food along the way is fantastic.

Our intended ride for 2016 is cycling the Rhine from its mouth at the Hoek of Holland to its source at Andermatt in the Swiss Alps.
http://eurovelo15.blogspot.co.uk

A most enjoyable round of the Netherlands :)) Magic!
http://adutchround.blogspot.co.uk

Our intended journey this year, cycling from John O'Groats to Lands End.
http://jugglingthejogle.blogspot.co.uk

Wake up thou cyclist, winter’s over
North Sea’s calling from a grey misty face.
White clouds flying and seagulls crying
piercing through the sky to tell you of her space.
Dark and lonely, wet and shining
like a mirror framed with haze.
-
Wake up thou cyclist, pedals beckon
to roam and fly o’ land in sun and morning mist.
And share the dikes with sheep and cattle
while ‘voiding droppings in your battle
accepting sportily this necessitate of gist
with reeks of laughter and tittle tattle.
-
Wake up thou cyclist, the ferry’s coming
taking you to land not been before.
The wind is singing and the sea spray flinging
rest your legs before you’re back ashore.
Now keep on going like travelling gypsies
Tenting and meeting fellow cyclists indulging in stories.
-
Wake up thou cyclist, the going gets rougher
on sand, through gravel and the old King’s Road.
It’s Viking cycling for the strong and the tougher
amidst fauna and bird’s song… hating your bike fully load.
Yet, you will make it what come or what may
by pushing or pulling on this hilly Old Highway.
-
Wake up thou cyclist, the end’s in sight
just a thousand more miles may be left in your fight.
But first see the puffins, than back on home soil
a dram of whiskey for all your hard work and toil.
Now the wind may be against or pushing you along
with white clouds flying and seagulls crying into song.
-
Wake up thou cyclist, family’s waiting
to greet you back into their loving fold.
No more tenting, or weathers’ zero rating
you’ve done it, you’ve made it, as was you well foretold.
You’ve answered North Seas’ calling and many pounds were shed
Wake up thou cyclist, it’s now in your very own bed!
©mb 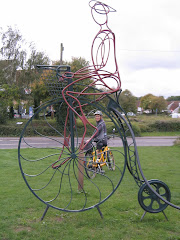 A Whitstable cyclist
As the link of Harwich-Hook of Holland now has an alternative in Dover-Calais we decided that we ought to cycle that part too. We left for Harwich and once there we set off on the no.51 for Colchester. Once in Colchester we linked up again with the no.1 and continued to Chelmsford. Absolute delightful ride to Harlow, then through Lee Valley alongside the river all the way to Limehouse passing of course the Olympic Stadium and seeing this taking shape for 2012. The signage could be better at times, especially in Chelmsford but I had taken an ordnance survey map with me as not all had been signed. (we knew this). From Limehouse we cycled to the Greenwich foot tunnel, got off the bike, took a lift down and walked the length of the tunnel to the south side of the Thames. No lift to take us up here, so we had to carry the tandem up some 95 steps! On the way to Dartford there are many obstacles in the form of awkward devices to stop the motorbikes coming through on the Thames cycle path. As we passed through the salt marshes of Crayford and Dartford we found it a haven for birdlife. Signage excellent. On to Gravesend. Cyclists aren’t allowed in the Medway tunnel therefore we had to make quite a big loop through Rochester. Again many obstacles. In Sittingbourne we kept getting it wrong. In the end were told by 2 helpful cyclists, that a sign was missing and were soon on our way. In Faversham we found that their north side an absolute delight. Old fashioned houses, probably Tudor. All in good looking order and the area looked very affluent. Arrived in Whitstable and again found the town very good looking. Heard on TV that this town still has the most privately owned shops in the country! On to the ‘Crab and Winkle Way’ to Canterbury. Wonderful cycle path, mostly off-road. From Canterbury to Sandwich, then on to Deal through Fowlmead Country Park, past Walmer Castle and Gardens through Kingsdown with the sea on our left. And finally we reached Dover Castle and of course we spend the day visiting this wonderful historic place. In total about 235miles. We have now cycled the entire length of the UK on the eastern side, also called Dover-Shetland and at the same time being the UK part of the NSCR.